The Science of Meditation

From the book "Altered Traits: Science Reveals How Meditation Changes Your Mind, Brain, and Body" by Daniel Goleman and Richard Davidson.

The Science of Attention Training: Samadhi

Cognitive habituation is the energy-saving function of our minds.

When a stimuli is 1) categorised or 2) perceived as not a threat our minds start to ignore that stimuli. Even if that stimuli, is a loved one, a beautiful painting or an amazing tree.

The downside of this is that we habituate to anything familiar. Reality becomes manageable but dull and repetitive. How often have you walked past a beautiful decoration or painting in your home that you were first intrigued and mesmerised by?

A Study:
Participants were asked to listen to a series of 20 beeps. The control group of normal, untrained brains responded strongly to the 1st beep but after a few beeps, the brains stopped lighting up. The brains had habituated to the sound. Advanced Zen meditators however responded as strongly to the 1st beep as to the 20th beep.
‍
When we meditate, we push attention to notice every little detail in an experience as repetitive as the breath. Meditation helps make the old new again. The implication of this is that we can experience people and what is around us like nature more clearly and freshly. Every moment is new and has the potential to be filled with child-like wonder.

Amygdala and the Prefrontal cortex 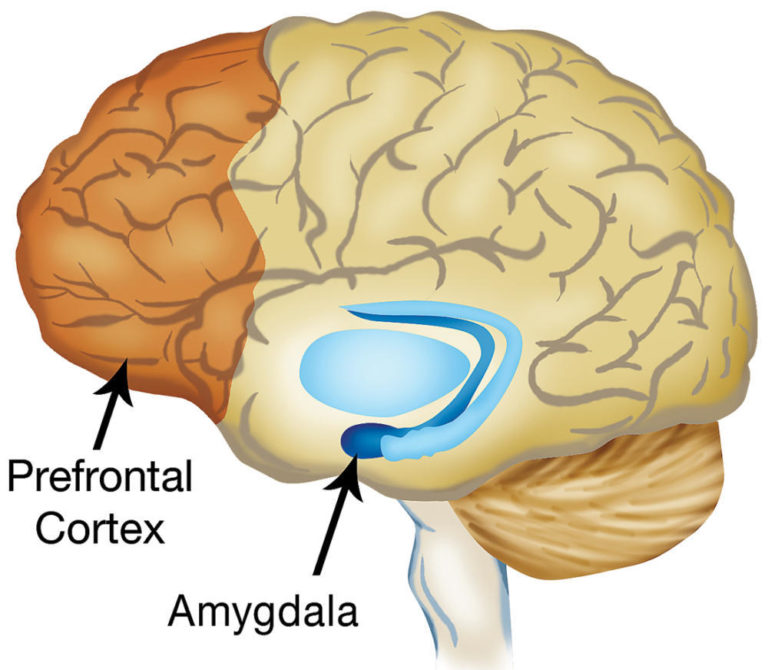 The prefrontal cortex is where higher level functions like learning, planning, deciding, setting goals happens. It evolved later and is very large in humans.

Amygdala is a radar for threat. This is a very primal part of the brain. It is strongly active when powerful emotions like anxiety or anger are felt.

When stressed, the Amygdala drives our attention. The Amygdala "hijacks" the prefrontal cortex. Where our attention goes is determined by what is making us stressed, anxious or angry. We keep re-triggering ourselves because our mind is drawn to this negative stimuli.

When taking active control of our attention just like in meditation or in other cognitive tasks, the amygdala quietens. Long term Vipassana meditators have a much quieter Amygdala. This is not only during meditation but also in waking life as an altered trait.

The implication is that over time and with training, our attention is trained to not be driven by fears/anxieties/angers but to move from place of higher level functioning. This allows us to act rather than react. To act from a place of wisdom and compassion rather than fear or anger.

Studies show that multi-tasking is a myth. We cannot pay attention to multiple things at the same time. Attention is actually quickly alternating between the various inputs. This can be studied in direct experience. Multi-taskers have their attention jumping around constantly. The cost of this that it takes one is never really focused on something and misses a lot of detail. Studies show that it takes several minutes of sustained attention to ramp up to being able to perceive in high detail again.

The upside is that chronic multi-taskers show the largest gains in attentional stability after short mindfulness training.

The field of cognitive science categorises different dimensions of Samadhi, or the skill to pay attention to what we deem is relevant. All improve as a result of meditation.

Selective attention. Paying attention to one thing and ignoring all else. Being able to focus on what matters. When there is an overload of information, this is the ability to ignore the noise and focus on the signal.

Vigilance. Being able to sustain attention over time to our selection. Not getting distracted quickly and teh ability to maintain a longer attention span.

Allocating. Ability to perceive very small shifts and details in what we pay attention to. A higher amount of detail can be perceived. For example, in conversation, we not only attend to what the person is saying but also notice many subtle nonverbal cues like the muscles around eyes twitching.

Goal-based attention. The ability to holding an intention in mind as we pay attention to something. This opposes to stimulus driven attention which is what happens when the Amygdala is more active. The impact of this is more resilience. This is very important for being able to learn something faster and more in-depth.

The DMN is the area of the brain which is most active when doing nothing. When we are not engaged in any demanding cognitive tasks. The DFM drives our strong habit of rumination and habitual thoughts. Rumination is almost always self-centered. Pay attention to the type of thoughts you have when not engaged in something. You are almost always worrying about something that happened to you in the past, planning about your own future, thinking about what is troubling you.

Harvard researched asked over a period of days what level peoples mental focus and subjective well being is. They concluded that a "wandering mind is an unhappy mind". When stuck in rumination we are drawn towards the negative.

The DFM quiets when engaged in meditation. When we train ourselves to intentionally pay attention we are less prone to rumination and worry. A lot of you have probably heard of the "flow state" or known colloquially as "being in the zone". As we train our baseline level of focus it is easier to reach flow state not only in special activities but also in everyday life, even when just taking a walk.

Identifying with Experience and the DFM

Meditation helps deconstruct the sense of self that is built through self-referential thoughts. The strong habit of identifying with experience rather than noticing that everything is just happening on its own.

A study looked at activation of the DMN where participants related in two different ways to experiences in meditation.
1. Identifying with the experience. When the meditators felt an itch or an emotion they identified with it by mentally saying "I feel itchy" or "I am impatient".
2. Noting the experience objetively. When the meditators felt a stimuli they just note it as happening without identifying with it e.g. "An itch is arising" or "Impatience is arising".

Number two showed much less activation in the DFM. Subjectively, it can be said that less suffering happens when we identify less with experience, seeing experience as impersonal changing phenomena.

Life-time hours of meditation are gold for reducing activity in the default-mode network not only while meditating but also off the cushion.